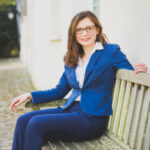 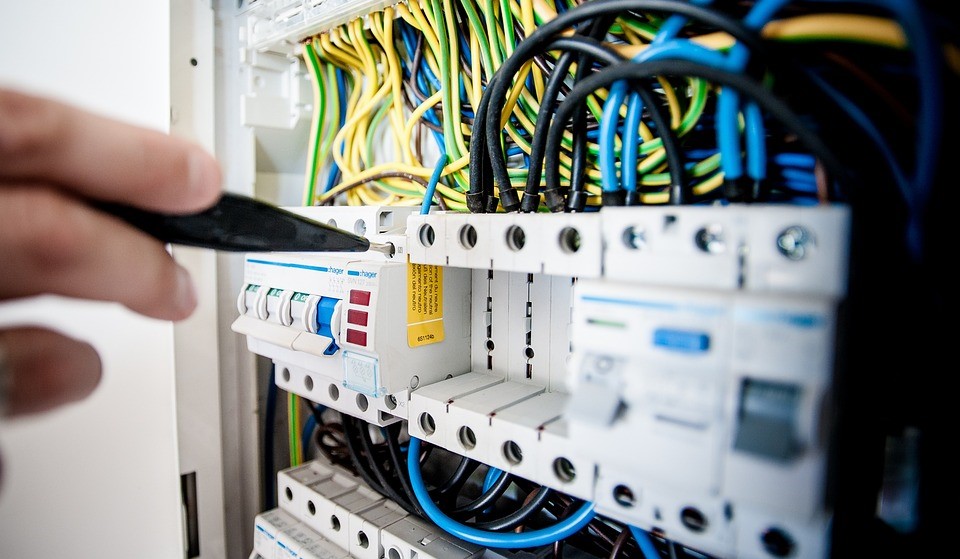 On the phenomenon of obtaining energy from piezoelectric materials deformation and the potential of using this phenomenon in biomedicine, wearables, and smart homes.

Imagine a future where we are not looking directly to the sun, wind turbines or sea tide for energy, but instead harvest it a little bit at a time through smart materials around us. It could be wholesale: powering your house with every drop of rain hitting the rooftop, smaller scale: using your tent to collect energy from wind and raindrops hammering against its fabric or to charge your phone while hiking, or extremely small: what if one could power a pacemaker by harvesting energy of a beating heart – thus reducing need for invasive surgeries for patients with heart problems. Such was the inspiration for the post-doctoral research fellowship conducted by Dr. inż. Natalia Potrzebowska for CEA, Ecole Polytechnique, under the supervision of Dr. Marie-Claude Clochard and Prof. Jean-Eric Wegrowe, within the PCnano group at Laboratoire des Solides Irradiés in France (NanoVIBES project funded byLabEx NanoSaclay).

The piezoelectric effect was observed in the 1880s by brothers Pierre and Jacques Curie (Pierre later married Maria Skłodowska-Curie), who described it as a conversion of mechanical strain into electrical charge and inverse [1]. The piezoelectric effect has been likely experienced by everyone who used a gas lighter while camping or at a BBQ. Like magic, pushing the trigger generates a spark that lights the fire. As simple as it gets. 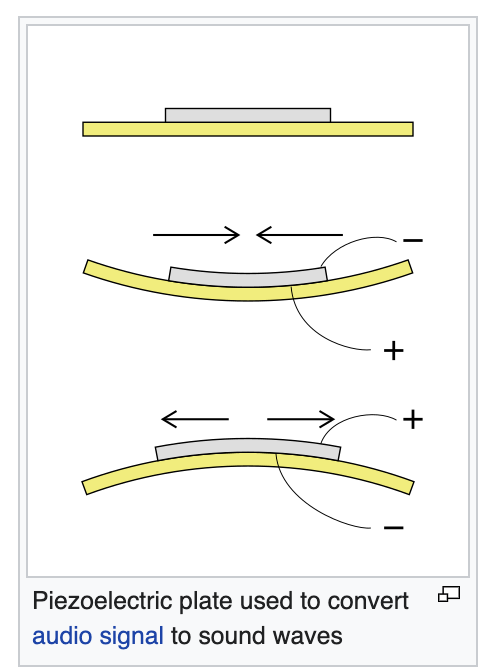 In theory free energy could be collected almost everywhere, including through body movements such as walking or running, fluid flow; even the aforementioned raindrops can provide us with energy. Materials with the property of producing electric charge upon deformation are called piezoelectrics and piezo-devices have plenty of applications and even more potential to be used in biomedicine, wearable devices, structural monitoring or smart homes if they aren’t already. 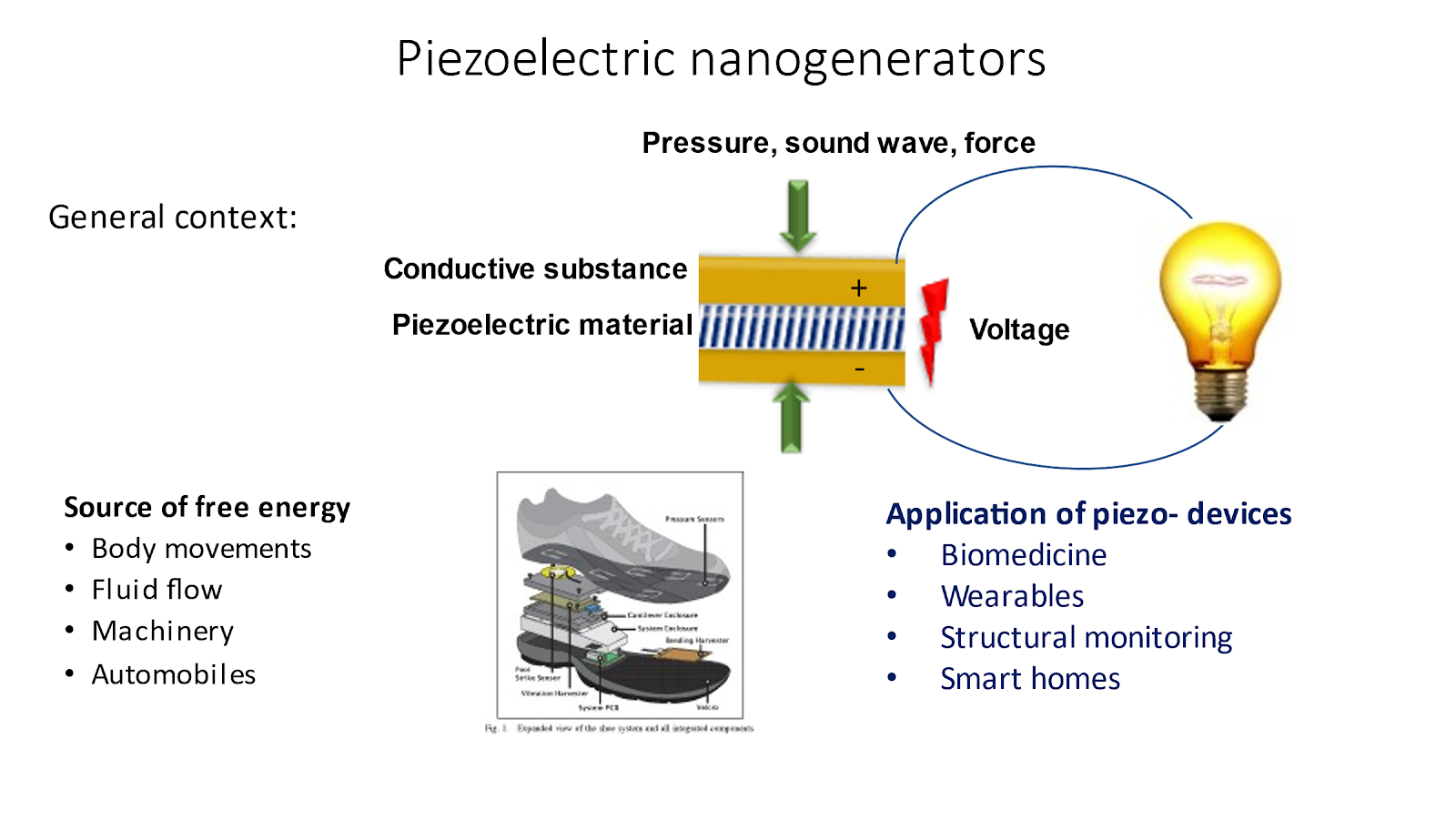 Although several materials are known to possess piezoelectric properties, a  significant amount among them is ceramic. The major drawback of such material is its fragility. A coffee mug is unlikely to survive a fall from a table, right?

The material to revolutionize the future should be flexible. Dr. Potrzebowska’s research focused on finding ways to increase usability of an already known piezoelectric with elastic properties: polyvinylidene difluoride – known as PVDF [3]. – It is commercially available as a thin film that is robust, flexible, cheap and can be applied over a large surface.

PVDF is a semi-crystalline polymer, known for its piezoelectric properties since 1972. “Semi-crystalline” refers to the way that molecules are organized within the material. It is mostly amorphous and flexible – the molecule chains flow about without order like water or glass – but also approximately 40% of its polymer chains are arranged in an ordered fashion forming crystals. This crystalline matter in PVDF can take three forms, or phases: alpha, beta and gamma. Of these, only beta has significant piezoelectric properties. 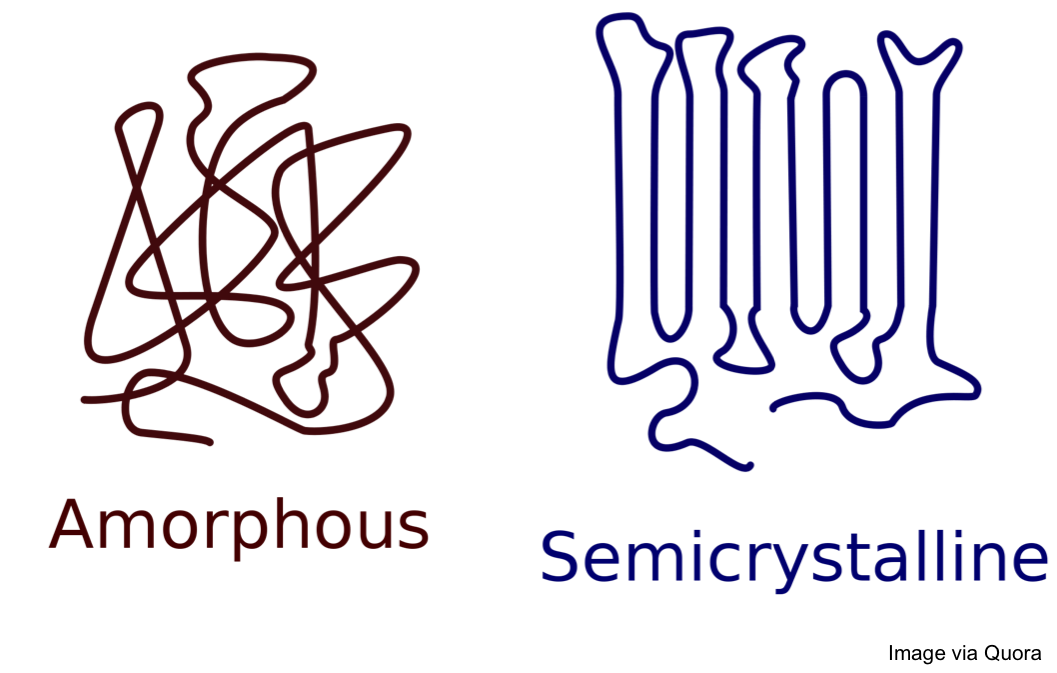 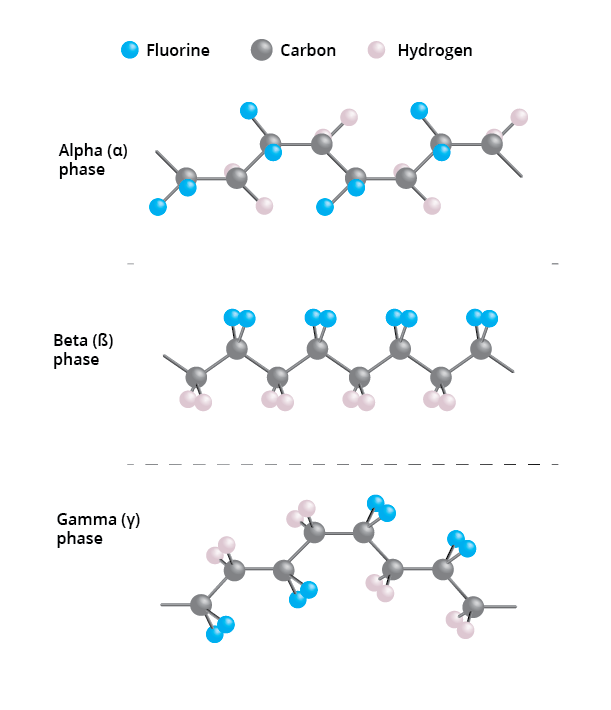 The objective of the work was to understand the role of each phase within PVDF –  amorphous or crystalline – and to find and push its limits with one of two methods:

In particular the first method – bombarding the sample with electrons (e-beam irradiation) allowed Dr Potrzebowska to arrive at a range of possible changes to PVDF material composition via external treatment. Chain scission and cross-linking of polymer as a result of e-beam treatment could affect the ratio of crystalline to amorphous phase within the sample and had to be checked for with melting temperature analysis (TGA).

Consistently with literature [8], it was observed that the higher the dose of irradiation, the lower the temperature of melting, indicating that strong irradiation reduced the size of crystallites in piezoelectric PVDF films studied. However, whatever the irradiation dose, no variation of degree of crystallinity (ca. 40%) is observed i.e. the percentage of amorphous to crystalline parts is still unchanged.

Another major parameter that required investigation was possible change in crystalline phases present in the sample under electron beam irradiation: i.e. beta phase to alpha phase ratio within the crystals.

The powerful tool that provided all the answers is solid state nuclear magnetic resonance (NMR). According to JEOL [4], a supplier of NMR equipment, this method allows analysis of the molecular structure of a material by observing and measuring the interaction of nuclear spins when placed in a strong magnetic field. Colloquially speaking, it allows one to measure spin of electrons thanks to magnetic resonance and consequently the change in the materials due to above mentioned e-beam irradiation treatment.

Clou of the research

Commercially available PVDF films were subjected to e-beam irradiation doses of 5 kGy, 500 kGy and 1 MGy with non-irradiated films serving as control. It was found that the piezoelectric responses of both untreated and e-beam irradiated PVDF films under strain strongly depends on their initial manufacturing processing. 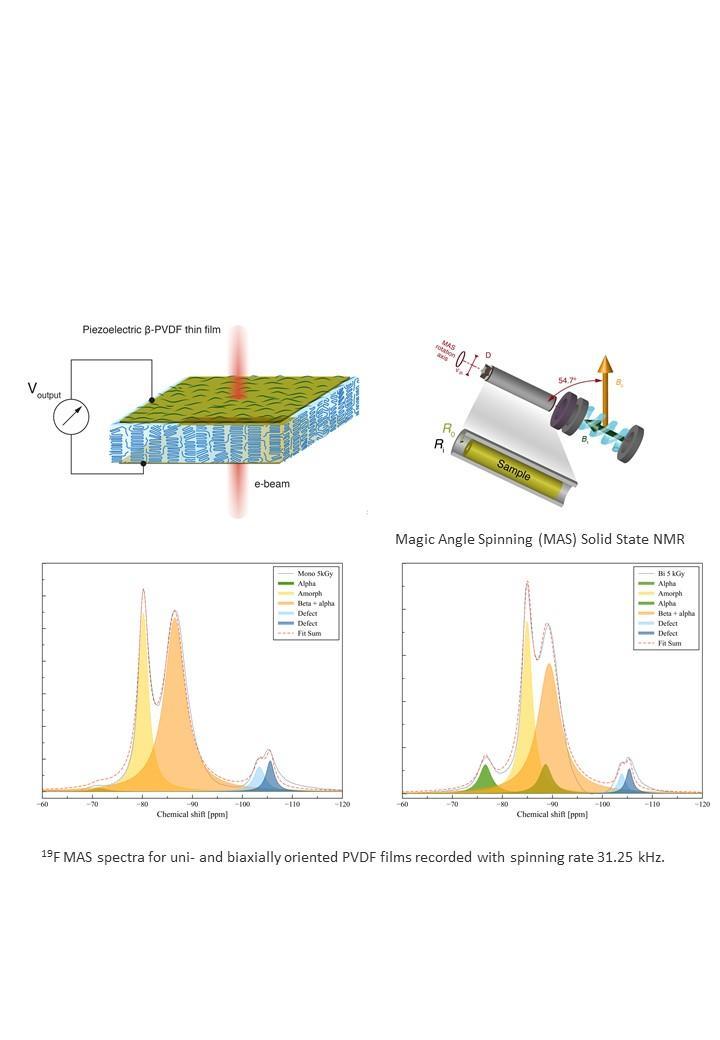 Piezoelectric PVDF films were produced by uni-axially and biaxially oriented stretch processing which favors formation of β-phase crystallites responsible for piezoelectric properties. Indeed, the piezoelectric response of uni- and biaxially oriented β-phase predominant PVDF were different. 19F MAS Solid State NMR measurements performed with fast sample spinning (31.25 kHz) allowed us to accurately determine the proportion of different  crystal phases. It was concluded that the uni-axial ((β)-PVDF) film was almost composed of 100 % of β-phase while the biaxially-oriented ((α-β)-PVDF) was composed of 81% β-phase and 19% of α-phase.

It was discovered that, regardless of manufacturing process, e-beam radiation-induced damages had a beneficial impact up to doses of 500kGy on registered piezoelectric output voltages (V output) generated by PVDF films deformation. 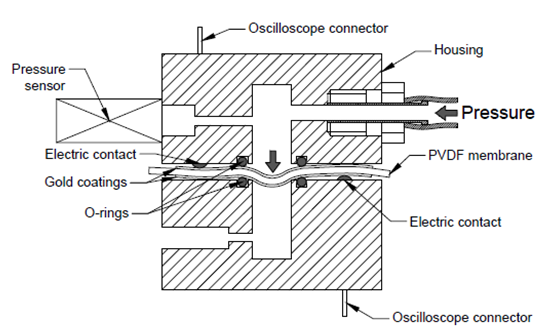 Figure 6 The cross-section of the pressure cell [9] 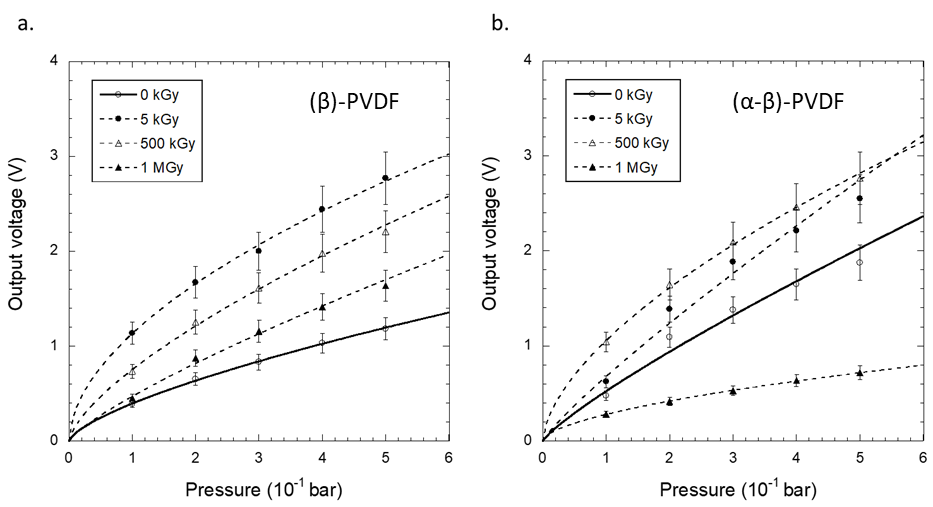 In a nutshell an e-beam radiation treatment of 5 kGy can bestow uni-axial PVDF film – which is actually cheaper to produce – with better piezoelectric properties than its bi-axially oriented PVDF film under and before the same treatment.

It shows how much progress we are making in studies of materials and also how much is yet left to figure out. At this stage it would be impossible to tell when and if such a method would have implications for the industry – many business trade offs remain a function of process scaling, cost and demand. Nonetheless – who knows – perhaps new industries and production methods are waiting to be discovered right around the corner, perhaps in Poland.

In the trend toward the development of portable devices, piezoelectric energy harvesting appears to be a very promising approach to powering micro-devices [2]. PVDF is already being used in many different fields of science and technology and research on them, but also the use of piezoelectrics is sure to increase in coming years. Piezoelectric polymers outperform other materials used for energy harvesting with characteristics such as flexibility and strength. More details of the study conducted are available among the sources listed in the bibliography:

Dr. Inz. Natalia Potrzebowska – Master of Nanotechnology of Technical University of Lodz, PhD from Chemistry. Natalia did her PhD at IRCELYON and her postgraduate studies at École Polytechnique. Currently working at STMicroelectronics as R&D Engineer in the team of Photolithography (Crolles, France). Her research interests include microelectronics, semi-conductors and photolithography.