We've just published the 12th episode of our podcast!
Link
Knowledge
What will trainings in virtual reality look like? Enea Operator, a Polish company, reveals the background of their innovative project 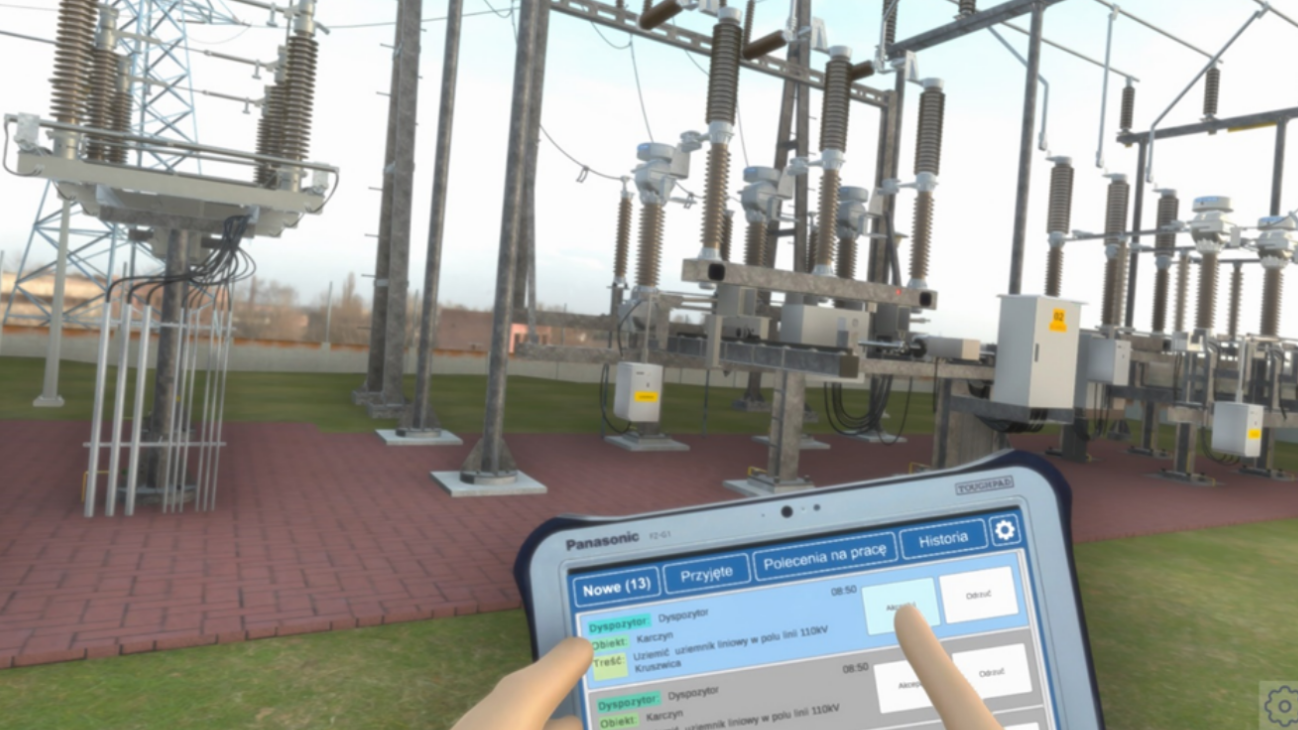 02 December, 2022
10 minutes read
Education/TrainingElectrical/Electronic EngineeringTechnology
What will trainings in virtual reality look like? Enea Operator, a Polish company, reveals the background of their innovative project
0 Comments

Polish energy company Enea Operator is changing the landscape of job training for its newly employed staff with the help of virtual reality (VR) technology. The aim of the project is to raise training standards, optimize equipment and tools used for job training, and ensure employee safety during training.

Virtual reality is no longer just a concept from a Science Fiction novel. According to Tim Sweeney, founder of Epic Games and one of the global experts on computer graphics, we are now close to a point where it will be difficult to distinguish between the real world and the virtual one. He said that the years 2020-2030 will be the most important and intense period in the development of VR technology. This adventure began with games and entertainment, but we are now entering the stage of implementing VR in industries such as energy, medicine and even aviation science.

This technology is becoming increasingly popular in industries that are dangerous and require resources difficult to obtain. For example, virtual reality is already making it easier to learn how to fly an airplane. Aspiring doctors are using goggles to learn how to perform surgeries – it is no longer necessary to use the human body for this type of practice. We can say that VR technology will be an unconventional yet creative addition to traditional practices. In the energy sector, Enea Operator (EOP), a Polish company, has decided to reach for this technology. Let’s present how the project has evolved over the years and what it looks like today.

Origins of the project

In 2019, Enea Operator (EOP) announced the launch of a new research and development project in cooperation with Poznan University of Technology and the Poznań University of Economics. The goal of the project was to actively use VR technology to train employees. The developed training program was expected, through the use of VR goggles, to increase employee competencies. Preparations for this groundbreaking project have been going on for three years. The total cost of the investment was more than PLN 6.4 million, including
a PLN 3 million grant from the funds of the European Union.

VR technology is very young, so the project required a significant investment of time and work to develop technical requirements and instructional scenarios that, given the state of the art, would be feasible. The scope of the project included a new training system for electricians, which was developed using knowledge engineering and Design Thinking methodology. In order to do so, Enea Operator reviewed more than 90 high-voltage work technology and nearly 40 switchgear construction technologies.

The key motivation that drove Enea Operator to reach for VR/AR Technologies was the high-risk nature of the electric power sector. As part of the project, Enea Operator created an information system architecture that consists of distributed hardware and software components connected by a computer network. Such structure enables efficient creation and presentation of standardized content in distributed units. For example, any employee requiring training in the operation of a selected Medium Voltage substation will be able to learn about the required tasks and spatial organization of the facility in a safe environment. The only prerequisite is to have access to training infrastructure.

Clearly, a hardware and ICT architecture without a source of substantive content is not enough. EOP, in an analysis done before the project, defined the problem emphatically: “The analysis of existing solutions demonstrated that there is currently a lack of solutions for modeling training VR applications for electrician operators, which could be used without the participation of IT specialists.”

As part of the project, a training scene creator was developed, which allows the creation of any scenario using a 3D object library prepared for this purpose, containing sample objects found in typical electromagnetic stations. In addition to 3D geometry and texture, the objects have parameters describing their properties in the real world, which can be relevant in a digital scenario. The tools used to create the library’s objects were 3ds Max and Unity, a video game development engine that was used to create the “Pokemon Go!” mobile game.

Instructions for operations shown on a virtual tablet

How does it all work in practice? After putting on the goggles and controllers, the electrician moves inside a 3D model that reflects, for example, the Main Power Supply Station (MPSS). The virtual representation looks realistic enough to emulate the most important electrical power facilities with accuracy sufficient to enable safe and effective training practices. Users can take advantage of multiple training modes:

– Exploration (no scenario) – freely move around the facility and interact with it to learn about its construction.

– Lesson – Scenario with active help mode, highlighting, path and no possibility of error.

– Exercise – Scenario with limited help. The possibility of making a mistake without consequences.

– Exam – A scenario without hints. Making a mistake results in termination of the scenario.

At this point, the Enea Operator Project includes training scenarios for 15 selected MPSSs, 10 Medium-Voltage Substations and a training center in Lagow, Poland.

The images above show a virtual training ground in Lagow, Poland and one of the Main Power Stations on Enea Operator’s premises.

The system poses two sets of challenges for users. One is related to adaptation to learning inside virtual reality, and dealing with control and reproduction of real-world activities in a VR environment. For example: mastering a character’s teleportation distance, grasping objects, pressing buttons and switches, using keys and measuring devices.

The second requires intervention from an instructor and is related to the scenario procedure itself and spatial orientation. In most cases, a new employee is unfamiliar with the layout of a substation or MPSS and cannot find the locations and tools required to complete the scenario.
What remains to be done is to wait for the completion of the next phase of the project, in which EOP is going to work on the challenges that came up in the testing process. What may prove may prove helpful in further development of digital training solutions is that the generation of digital objects in teaching scenarios followed Semantic Web standards – used to formally represent knowledge under artificial intelligence applications and in robotics. The system understands what objects and tools are in 3D space. In the future, it may even be able to generate training problems automatically.

Will virtual training replace the processes we used before?

“It is important to note the great advantage of this system – flexibility. We are able to extend the training scenarios with new virtual scenes that will be even more advanced and accurate. This is a perfect fit for the dynamic pace of technology and the energy industry. […]. Thanks to the high flexibility, creating new scenarios and introducing new issues will not be a problem.” – says an employee of Enea Operator. The system’s creators herald that, with updates, it will easily keep up with future training requirements.

The project („Elastyczny system zwiększania kompetencji pracowników służb technicznych z zastosowaniem technik rzeczywistości wirtualnej”) is co-financed by EU funds in the amount of PLN 3,050,641 under the Research Program of Narodowe Centrum Badań i Rozwoju „Szybka ścieżka dla dużych przedsiębiorstw i konsorcjów”. The value of the entire project is PLN 6,260,305.